JOHOR BAHRU, 1st Dec. — As many as 34 researchers from Universiti Teknologi Malaysia (UTM) have been listed among the top two percent scientists in a global list compiled by the prestigious Stanford University from the United States (US).

The US-based Stanford University has recently released a list that represents the top 2% of the most-cited scientists in various disciplines. The list includes the names of 21 Professors, 11 Associate Professors and two senior lecturers from several schools attached with Faculty of Engineering, Faculty of Built Environment and Surveying (FABU), Malaysia-Japan International Institute of Technology (MJIIT), Faculty of Social Science and Humanities (FSSK) and Faculty of Science.

The Deputy Vice-Chancellor (Research and Innovation), Prof. Datuk Dr. Ahmad Fauzi Ismail who is also the Acting Vice Chancellor, said that these researchers have been selected on the basis of their research papers’ international evaluation.

“This recognition of several faculties in the world’s top 2% of Scientists List has placed UTM in a global map of science and has brought great pride to the institute. Congratulations to all the 34 researchers for the hard work and commitment in furthering Science,” said Prof. Fauzi.

Stanford University, the place where this database of world scientists is created, is a private research university located in Stanford, California. Officially known as Leland Stanford Junior University, in Santa Clara County founded in 1885 by Leland Stanford, a U.S. Senator and former Governor of California. The school admitted its first students on October 1, 1891, as a coeducational and non-denominational institution. 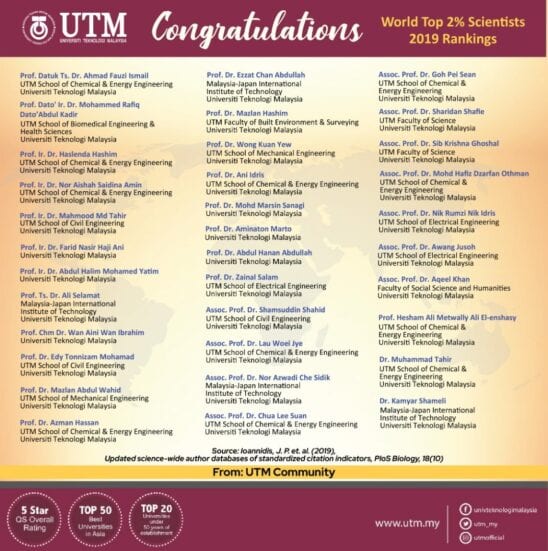