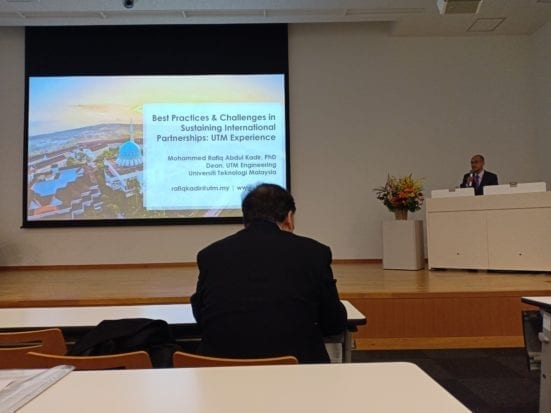 Representing UTM Vice Chancellor, Prof Mohammed Rafiq highlighted the key role of the international office in sustaining international partnerships, and several best practices including active participation in international events for higher education, a system to record and monitor partnership activities, and close communication and cooperation with members of faculties. At present, UTM has more than 300 active global partners and is actively involved in 26 international alliances. At the convention, several strategic collaborations with top global universities such as the MIT-UTM Malaysia Sustainable Cities Program with Massachusetts Institute of Technology and Low Carbon Transport Research with Imperial College London were also highlighted.

JAGCE is an academic association founded in 2013, with the aim to enhance competency of students in a rapidly globalising world. Its activities concentrate on developing human resources with an emphasis on diversity, providing networking opportunities, and fostering collaboration among those in the industrial sector, academia and government. The participating universities, among others, include Nishi-Kyusyu University, Akita International University, and Meiji University.