JOHOR BAHRU, 14 May 2019 – The device that can provide an early detection of a landslide was sucessfully developed by a group of researchers from the School of Civil Engineering, Universiti Teknologi Malaysia (UTM).
Project Leader, Assoc. Prof. Dr. Ahmad Safuan A. Rashid said that the Automatic Wireless Accelerometer Monitoring (AWAM) that he and his team had successfully developed has the warning potential of any possible slope hazards by detecting it.
“This system was designed with the intention to be a new way of monitoring slopes. While focusing on slope surface monitoring, this system will be self-sufficient, wireless oriented and suitable to be used in remote or extensive monitoring areas.
“It was an automated system with minimal human interaction, built to cover a large potential area of monitoring complete with an adjustable sensor readings,” said Dr. Ahmad Safuan.
Built with a simple approach but caused by larger objectives, the AWAM detection system consists of multiple principles of sensors, self-sustaining power (solar panel) and wireless data transfer.
“With this simple concept, getting access to real-time monitoring of Risky Slopes are no longer a thing of the future.
“It will make it more convenient to the users with the existence of smart phones and computers with a limitless network of information at anyone’s fingertips. Checking the daily status of one’s home, work place or even remote hometown status of safety after the day’s weather forecast may well be true now,” he said.
This system functions as an Early Warning Beacon for potential disasters in the vicinity of monitored sites. The subscribers will have a calm and tranquil piece of mind knowing that their homes are being guarded round-the-clock.
With a large area of potential monitoring, in addition to an easy two-man installation procedure, the coverage of this system will be up and running in no time.
“The repeating cases of loss of lives and property damages in such uncertain weather conditions would benefit entitled users. Early warning would have saved thousands of Ringgit and having potential of saving life in the process.
“This AWAM warning system has a good potential to dominate the domestic market as there is no direct competition of such system. With future advancements in the technology for monitoring sensors, an even larger scale of disaster management tools could be combined altogether to make the monitoring jobs more convenient,” he said. 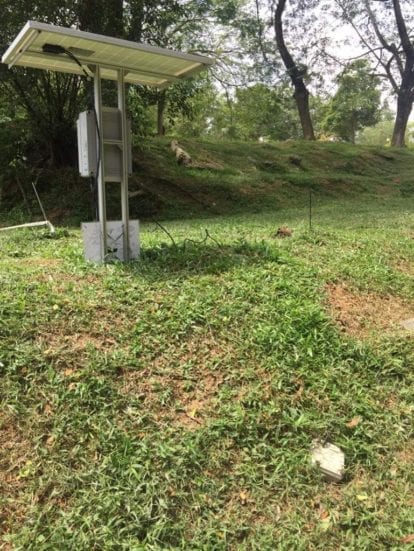