An informative talk on the careers in information and communication technology (ICT) on the lucrative and highly on-demand careers available in the enterprise ICT industry was delivered by Mr. Ammar, the co-founder of AI technology company, ITXOTIC Sdn Bhd, recently. Mr. Ammar graduated from the University of Michigan, Ann Arbor, US in 2001, with a bachelor degree in Electrical Engineering and Computer Science. During his university years, Mr Ammar engaged himself in the world of UNIX, Linux, and open source by working as a part-time UNIX systems engineer with the College of Engineering, which eventually made him decided to pursue his career in ICT. Moving forward 20 years (or so), Mr. Ammar now has had the privilege to work in various large companies such Hitachi, Schlumberger, Hewlett-Packard and Intel, and has supported many well-known clients, such as Shell, Petronas, NTT and Citibank

Mr. Ammar’s career started with a salary of RM2,000++, as an R&D Engineer with Panasonic. Quitting after merely six months, he landed a job in Schlumberger as Systems Engineer for high-end computing systems like Supercomputers & VR, with an increased salary to RM3,500 and re-located himself to Sarawak. From there Mr. Ammar built his career and moved on to work as a technical consultant in Petronas ICT focusing on enterprise storage systems and disaster recovery solutions. With the accumulated experience, he eventually was head hunted to join Hitachi Data Systems, starting as a professional services engineer and moving up to become a Master solutions architect where his range of salary progressively went up from RM8,000 to RM15,000. His next job, took him to Tokyo, Japan as a business solutions manager/global product manager, with a salary that Mr. Ammar decided not to share. Please be informed that revealing his salaries in the first few years of his career are to inform all the engineers out there that there is abundance of opportunities exist in the engineering career, as long as you are willing to upgrade yourself, according to the industry’s current need. Currently, Mr. Ammar is an avid businessman, being the co-founder of ITXOTIC Sdn Bhd.

Mr. Ammar initiated his talk with introducing the audience with a data centre. Data centre, is a building or a dedicated space within a building, or a group of buildings used to house computer systems and associated components such as networking and storage systems. An efficient IT operations are crucial for business continuity, hence redundant or backup components and infrastructure for power supply, data communication connections, environmental controls (e.g., air conditioning, fire suppression), and various security devices are required. Most companies opt for cloud storage for a larger space. When a business grows, a larger data centre is required. Since the industry is growing (and still growing), more experts are needed in this area.

In his talk, Mr Ammar has listed several engineering jobs in Enterprise IT (System Administration) as shown in Figure 1. 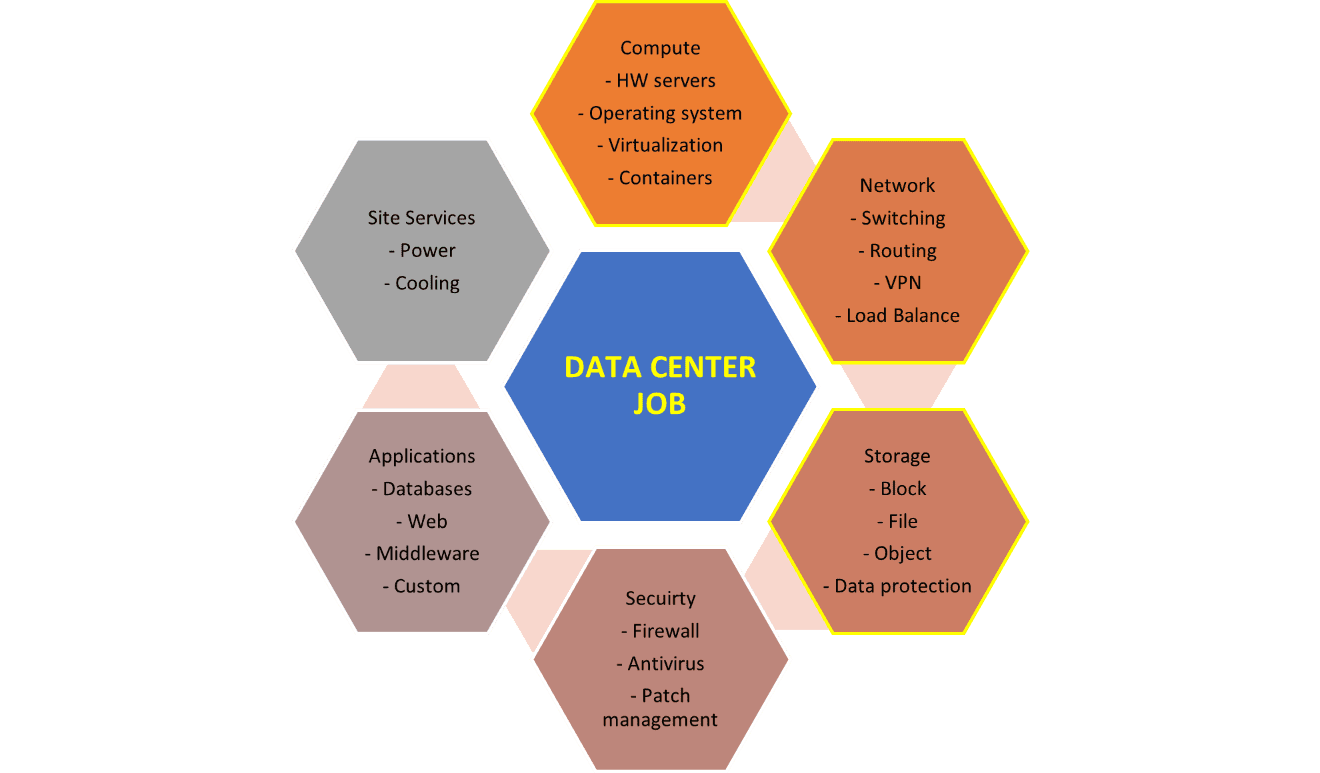 The three areas that Mr Ammar has vast experience in are compute, network and storage, which are covered in his talk.

The first career choice is Network Engineer. Network engineers or network architects is responsible to plan, construct and manage networks to ensure that they are optimized and performing their intended functions. A network engineer is also responsible for the foundation of an organization’s IT system. Network Engineer needs to have a high analytical skill to troubleshoot on issues and to prevent recurrence. Knowing the current programming languages is also important, and since more networks are using open source networking resources, knowing Linux is a must, knowing the hardware and infrastructure, and the networking need as well as the maintenance required. Being a network engineer, you will start with a physical solution, but ultimately you need to design an array of networking functions.

Common companies offering the position are CISCO, Huawei, Ericsson, Juniper and Mellanox Technologies. Ericsson is currently doing data centre management. Meanwhile Juniper and Mellanox Technologies are the two top companies for careers in enterprise IT, as these companies provide high end computing solution to customers. RM20,000 is a standard salary for industry certified network solutions architect, but they need to be able to design complicated solutions as required by these customers

Next choice of career is as a Storage Engineer where knowledge on storage networking is vital. The work as storage engineer does not differ much from a network engineer. As a storage engineer, is responsible to develop and oversees databases, networks and other large storage capacities systems. Storage engineer deals with some complicated design and configuration. The primary responsibilities include designing storage systems that meets the required performance, availability & data protection and maintaining the related hardware and software systems.

A storage engineer is responsible for managing a storage area network (SAN), used to access data from large storage arrays by the servers, & ensuring that data are not missing, performing background check to avoid corruption, & keeping synchronous copy of data from one data centre to another data centre for disaster recovery, and anything related to storage requirement. According to Mr Ammar, when he was a storage engineer, his salary at one time exceeded RM20,000. For those who are considering storage network in their career path, should consider companies such as DELL EMC, NetApp and Pure Storage.

Another career in IT enterprise is Systems Engineer. System Engineer is an interdisciplinary field of engineering and engineering management that focuses on how to design, integrate, and manage complex server systems. A system engineers can build a career dedicated to dealing with computer hardware where he needs to understand how the computer hardware devices & architecture works. Another path of a systems engineer is managing servers and operating systems, also known as system administration. These engineers need to understand managing basic input/output system (BIOS) and Firmware; does it has the latest BIOS to protect against different bugs, security issues, then operating systems (OS) and all the functions of an OS (driver, libraries and runtimes) and how to interface with the OS. And on top of that, knowledge on databases, and middleware application are also significantly important.

Several common companies having systems engineering as your career path include Intel which partnering up with Hewlett Packard Enterprise (HPE), DELL Technologies, Oracle, Microsoft, IBM and Red Hat. Microsoft for example deals with the software applications & OS, while IBM deals with both hardware and software. Red Hat, on the other hand, is the world’s leading company for enterprise Linux, a very popular open-source operating system. Jobs you can apply for include providing hardware solutions to companies like Oracle, DELL or HPE, managing databases and database solutions to Oracle, and providing solutions dealing with OS and other open source-based software, as a Red Hat LInux engineer.

Talking about software and cloud solutions, Mr. Ammar stresses on the fact that the world is moving towards software defined. The move has inspired a new market called virtualization. Network, storage, and servers are physical component which are not easy to manage and allocate resources, hence emerges virtualization. Virtualization, in a brief is a technology that lets users create IT services by abstracting resources which are bound to hardware. Virtualization came out 20 years ago, but over time became more robust and now is widely used in the industry, both in enterprise, and cloud. The first ever use of virtualization is the creation of virtual machine. Currently, the latest use of virtualization is containers, which essentially is an extraction of virtual machine. Virtualization via containers is also known as containerization. Currently, almost all our web applications, especially companies like Google & Amazon are running in a container-based architecture. For example, when someone opens a YouTube video, YouTube will then create a new service as container, which will pull the video data from a storage array, and it will run it inside one of these containers. Once finished, it will shut down that container and release the resource to be used by another application, so that it can efficiently use that resource from the server. Companies having this career opportunities include VMware, Citrix, Red Hat. An example of technology they use are Kubernetes, Docker and Red Hat OpenShift. The salary ranges from RM2,000 up to a five-digit figures, depending on what you do, your seniority and your importance to the company. Virtualization is a very lucrative business to be in, and the fact that it is the current trend in enterprise IT and cloud, those who are software-inclined should go for virtualization of infrastructure management.

Knowledge required in enterprise IT includes building of knowledge on how things work, knowing how to work in a team on a much higher level in the working industry. As engineers, understanding the theory is not sufficient, an engineer must make it work! Working knowledge on operating system is significantly important, how things work in an OS, how your storage and network or application connects with each other. Personally, Mr Ammar highly expressed his personal views on those in enterprise IT to learn Linux and how it works, which makes you an asset to an IT company.

Currently, virtualization has become the key technology to any companies. VMware for example is a cloud computing and virtualization technology company, a technology provider. If you are considering a career path in enterprise IT, one should learn more on VMware and the technologies they created.

Advancing more towards Docker and Kubernetes, are the key technologies any IT companies will consume to create the new applications or the new business functions used for their own business.

Finally, Mr. Ammar stressed on IT best practices where it’s not just knowing the knowledge of the technology but having a strict set of best practicesor disciplines about how we operate inside IT. For example, ITIL (Information Technology Infrastructure Library), which is a framework designed to standardize the operation, planning, delivery, maintenance, and overall lifecycle of IT. Agile/SCRUM on the other hand is used in software development in keeping to a project management task, and lastly DevOps, where development of application and transition to operation of this new development of application are performed within an automated cycle, etc. These are the IT key practices in which these aspiring engineers need to dwell into. 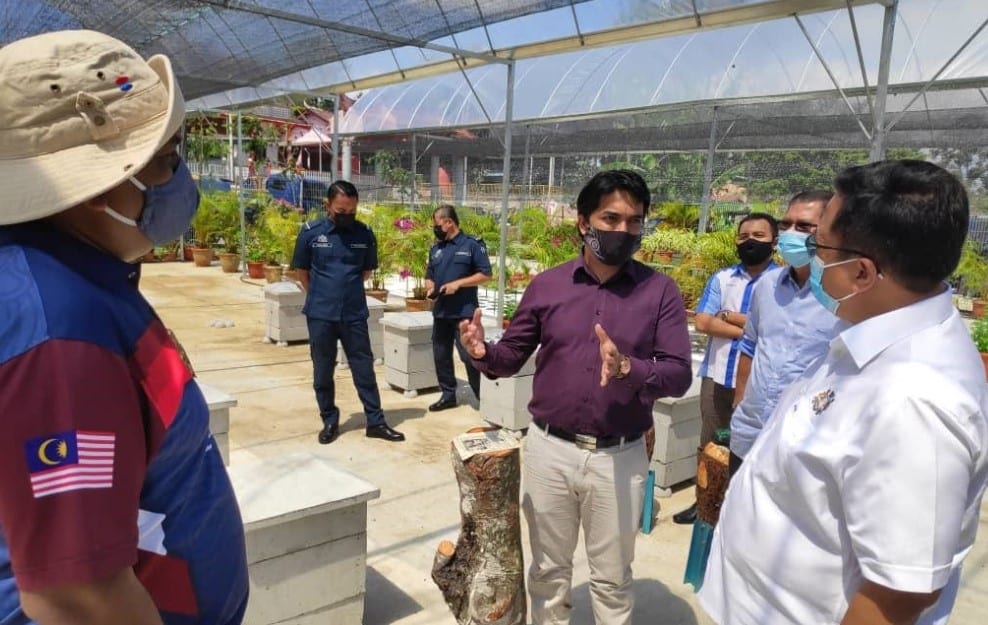 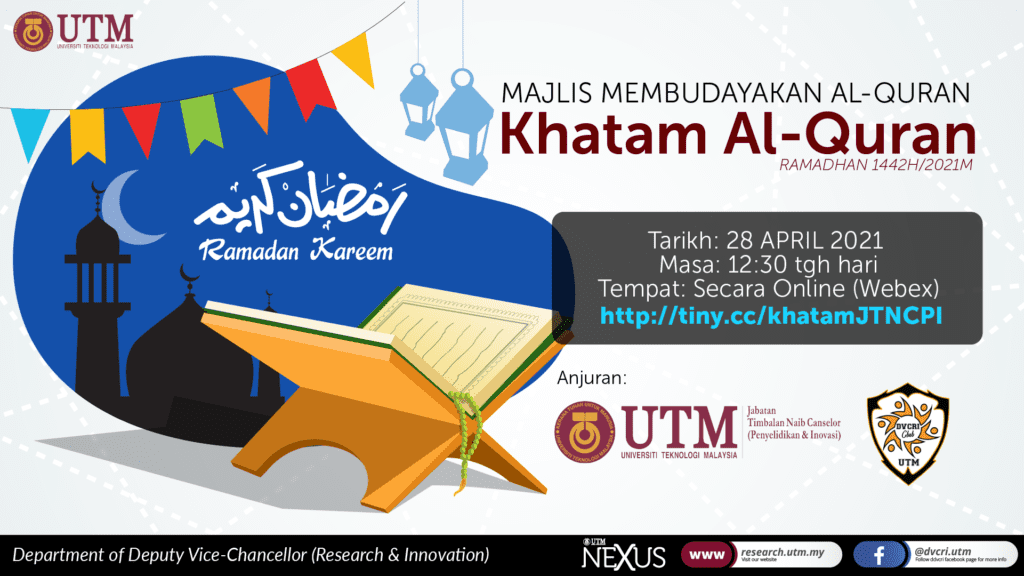