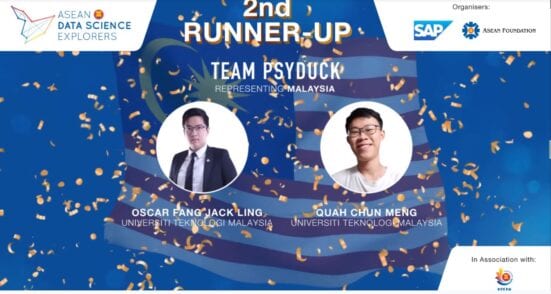 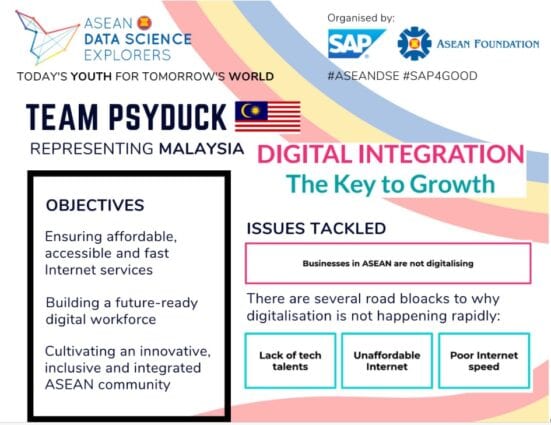 This ASEAN Data Science Explorers (ASEAN DSE) is an annual flagship event organized by SAP and the Association of Southeast Asian Nations (ASEAN) Foundation since 2017.

This initiative has educated more than 10,000 young people across 250 institutes of higher learning in ASEAN countries to increase their digital literacy and cultivate a greater sense of responsibility and ownership towards the region’s future. Featuring 10 reigning national champions from the 10 ASEAN countries, these finalists competed in presenting data-driven solutions that support the Sustainable Development Goals (SDGs) in the region.

This year’s Regional Final which was supposed to be held in Hanoi, Vietnam was conducted virtually for the first time.

The top three teams this year are:

Throughout the past five months, Team Psyduck had designed a storyboard that consists of key findings and implementable solutions based on data-driven insights using SAP Cloud Analytics to tackle one of the ASEAN socio-economic issues.

They presented their storyboard of “Digital Integration: The Key to Growth” where they emphasized how important is digital integration in enabling ASEAN to have an inclusive socio-economic growth as well as the roadblocks and solutions to overcome them.

Jason Quah Chun Meng said, with this victory, they hope it will inspire others to take part in the next year’s ADSE and delve into data science.

“The feeling of honour and pride to carry our Malaysian flag are just indescribable.

Thus, we call for all students not to only excel in studies, but in other parts as well,” he said.