A UTM academician, Dr. Zulkifli Khair was invited as a keynote speaker for MonsoonSIM Users Conference in Penang on 18 January 2020. The conference served as a platform for sharing of experience about the implementation of MonsoonSIM in the higher education institutes (HEI) within Asia Pacific countries. This was the second conference organized by MonsoonSIM Academy after the first conference held in Bali, Indonesia last year.

Dr. Zulkifli, Senior Lecturer of SHARPS, Faculty of Social Sciences and Humanity, UTM presented ‘MonsoonSIM Creativity Challenge – The Game Changer’. MonsoonSIM is Enterprise Resources Management (ERM) games and simulations. He shared how MonsoonSIM has been implemented in teaching and learning as well as on its assessment and evaluation. Many kinds of literature recognised games and simulations in HEI giving a positive impact on critical thinking and communication skills, which comply with 21st Century Skills.

The conference also served as a platform to learn new version and development of MonsoonSIM, the only game and simulation that is recognized by SAP, the world market leader in enterprise application software. The participants also were introduced to implementing data analytics within MonsoonSIM through a few software such as Microsoft Power BI, Google Analytics, and Tableau Public. The 2020 International MonsoonSIM Competition will be held in Melbourne, Australia and UTM team is looking forward to winning the game. 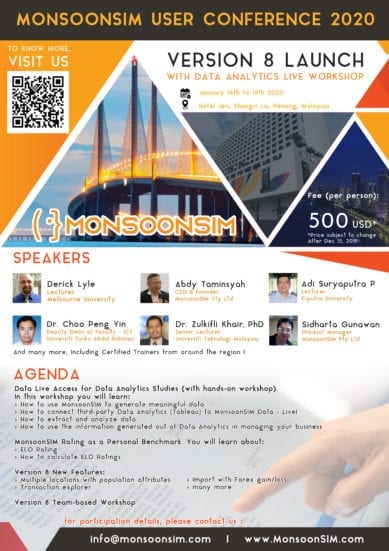