Just because something is a tradition does not mean that it cannot be changed from time to time. Hence, this time around, we spruced up our Culture Corner activities in collaboration with the International Student Society (ISS) to hold the biggest and most unique Culture Corner ever. In UTM’s endless endeavour to “internationalise at home” and to bring all students from different countries and cultures together for cultural exchange, it is UTM International’s duty to constantly think of new ways to do so.

Assoc. Prof. Dr. Mohd Ariffin Abu Hassan, Manager of Student Experience, kicked off the afternoon by warming up with some dancing. Then, he gave a briefing about the first activity: International Games with ISS. As a tradition of Culture Corner, students were assigned to groups comprising different nationalities. This time around, all the students were divided into 20 groups and they were to complete all games the ISS organised within a stipulated time. Participants immediately competed with other groups and scores were accumulated at the end, adding to the tally of scores from the next slot.

First, China demonstrated their beanbag game, where two teams with two players of each play. Description of the game: One team throws the beanbag and another team dodges it and catches it if possible. If one of the dodging players gets hit, he or she is out of the game unless the surviving one catches the bag. When both players from a team are hit, they will be out of the game for that particular round. The next round then starts with the teams exchanging roles. Points are given based on the number of rounds won by each team.

Next, Sudan demonstrated their game of scarves; a game that can use any kind of cloths, not limited to scarves despite its name. ISS Sudan proved this by using their national flag. The game is fairly simple: a team will hold the scarf up like a matador and the other team will try to catch the scarf. The roles are switched after each round. 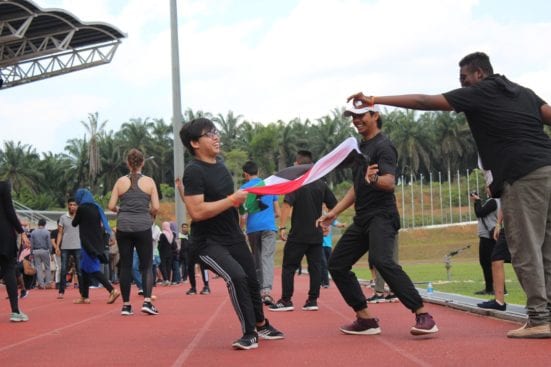 An easy game is always a good stress reliever

There was also Pitho Garam, a game from Pakistan, which is akin to slipper tossing in Malaysia but with broken pots. The rules are: form two teams of unlimited members; find a ball and pieces of broken pots; then stack them up. The opposing team would throw the ball at the stacked pot pieces. To win the round, the throwing team must rebuild the fallen stack of broken pots before the opposing team hits them with the ball or else, the round ends without a winner. In play, it proved to be quite difficult to find a winner for this game.

Representatives from Afghanistan demonstrated the rope-jumping game, where players will jump over a rope, but blindfolded. Extreme caution is to be taken as this game has risks of injuries due to players falling on the ground. 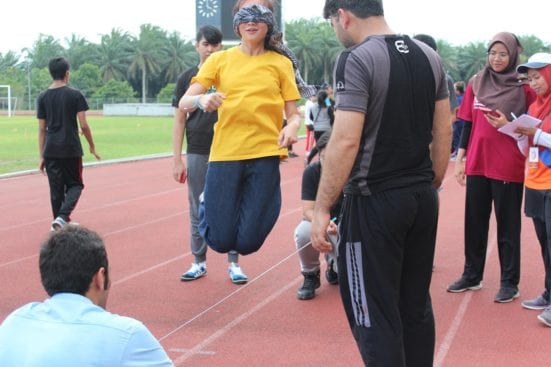 Imagine jumping while being blindfolded

Indonesia came to play with a three-in-one game. It was a relay competition of inserting nails into a bottle, passing marbles on spoons and then eating a hanging snack. First, players must insert nails that have been tightened on their waists into the bottle. Then, they pass marbles on spoons to another member in a team in a zigzag path. Finally, they end the run with eating hanging snacks without using their arms.

Besides that, Yemen’s traditional game was quite tricky. First, one team makes a circle and another goes into the circle. The first team would have to try to hit all the players in the circle while a player counts from one to fifty. Hit all of the players before fifty and the team earns a point. Else, the point is not earned. Then, the next round will start with the teams swapped. The game ends when one of the team accrues the pre-determined score.

Finally, Somali representatives demonstrated their traditional jumping game, known as teng-teng in Malaysia, generally known as hopscotch and stone house in some other countries. In the game, a player throws a stone as a marker and jumps on all of the square tiles with one foot, retrieves the marker and jumps back to the starting point. It was believed that it originated in Rome as a form of military training, then kids followed suit but in a fun manner.

With all games by ISS done, it was then time to introduce traditional Malaysian games. The games played were lari dalam guni, tarik pelepah, gundu, lari tempurung and coconut bowling. Lari dalam guni and lari tempurung both have the same rules, which are relay running back and forth but on different objects, using sacks (the bigger, the better) and coconut husks, respectively. Gundu is where rubber bands are used to shoot hanging rubber bands. Tarik pelepah or palm tree pulling is when a player sits on a palm tree leaf and is pulled by another player to the finishing line. Coconut bowling is bowling but with coconuts and water bottles. 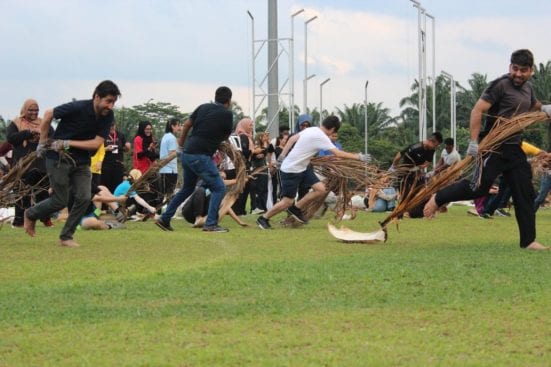 After all the hectic competitions, all participants were asked to form “I AM UTM” as a unique group photo. It was amazing to see the result and would definitely be a nice picture to further bring UTM to the world and the world to UTM. 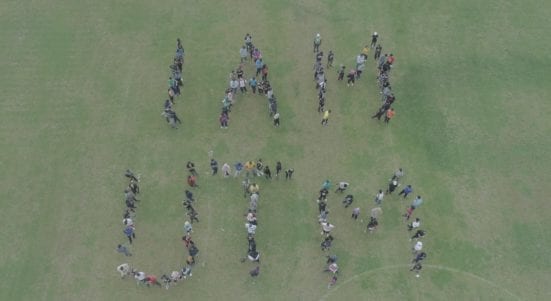 The event then took a 15-minute rest. During that time, everyone went back to playing games but this time just for fun and selfies. Participants were encouraged to use the hashtags #utmawesome and #utminternational to promote Culture Corner. Everyone enjoyed their short time together, including the staff and managers. After that, the prize-giving ceremony was held with Prof. Dr. Nor Haniza Sarmin, Associate Director of Student Services and Global Education Experience, giving out the grand prizes to the five winning groups.

All in all, the event was smooth sailing from the start right towards the end. UTM International implores more students to come and join in the fun-filled activities. Stay tuned to our Facebook page for more upcoming activities!